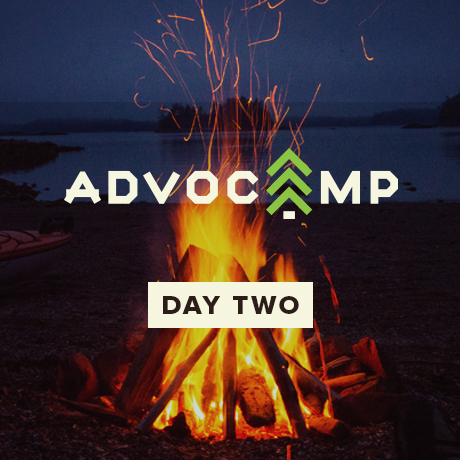 Day 2 of Advocamp 2017 started with an inspiring keynote from the prolific author and speaker Geoffrey Moore (Best-selling Author of Crossing The Chasm, Speaker & Advisor). He spoke on what he believes to be the twin foundations of any successful marketing plan: advocacy and authenticity.

Geoffrey stressed that human beings communicate things of importance to each other through narratives, including “unsolicited endorsements” of products and services that they love. The crucial component is that these narratives feel authentic.

How can customers tell if your advocate marketing is authentic? Geoffrey says it’s all in tone of voice, whether verbal or written. He says we all “have a very sophisticated crap detector operating at the back of your mind.” So companies must be careful not to set anyone’s alarm bells off with inauthentic marketing stories.

To combat this, Geoffrey recommends asking yourself: How egocentric is your narrative? How can your customers help make it less ego-centric?

This legendary author was also quite the comedian live, making audiences chuckle with lots of great zingers.

@geoffreyamoore when I say “I am a good lover” it’s advertising, when you say “he’s a good lover!” It’s PR. #Advocamp Mr. Moore is a compelling speaker!! pic.twitter.com/WjPXezNLMX

Panel discussion on reviews ‘round the campfire

Next up was a panel sponsored by TrustRadius and hosted by its Founder and CEO Vinay Bhagat (featuring various perspectives on how to use reviews to scale in-depth customer content, increase authenticity, and make a bigger impact across the entire organization).

Davin Wilfrid (Senior Manager, Content & Customer Advocacy at QuickBase) mentioned how negative reviews can actually be a good thing because a mix of bad and good signifies authenticity. Vinay added that there are studies proving that books with more balanced reviews actually convert and sell more than ones with unanimously positive reviews. After all, when something looks too good to be true, it’s not believable.

Michael Beahm (Senior Marketing Manager at Blackbaud) added that he deals with negative reviews by getting his product marketing team to respond directly. They thank reviewers for their feedback, and genuinely take that feedback into consideration with their future product direction.

Julie Perino (Senior Director of Customer Marketing at Marketo) mentioned that less than 24 hours ago, she implemented the new bi-directional TrustRadius integration into Marketo’s AdvocateHub advocate marketing program. This integration with the reviews platform will help her team source and keep tabs on all their reviews—both positive and negative—and react accordingly to derive benefit from both.

It’s time for a a customer panel to talk Advocacy & Reviews! #advocamp pic.twitter.com/EzPoMztgDO

Time to get AMPed

Campers were faced with tough decisions as the conference was split into three tracks of AMP Talks.

Here are some of the major highlights:

Sujan Patel (Growth Marketer & Co-founder of Web Pofits) kicked off track one in the main ballroom by sharing his five C’s of customer-driven growth.

By implementing the five C’s, companies can unlock rapid growth. They are:

David Spinx (Founder of CMX Media) opened his talk by reporting that loneliness has been on the rise since the advent of smartphones, and it has been proven to be as detrimental to one’s health as obesity or smoking. He stressed that community builders—yes, even those responsible for branded communities—have an extremely important role in fixing this.

“We’re more connected than ever, but more lonely than ever…creating a sense of belonging is important work.” – @DavidSpinks speaking truth. #Advocamp 🌲🐻 pic.twitter.com/MDrjJ4uPYG

David says that branded communities need to align their business goals with community missions. They should unite people to create real, meaningful connections and a sense of belonging.

According to a study by CMX and Influitive that examined over 300 companies, the #1 reason communities fail is because communities lack internal support and resources. This is why proving ROI through metrics is a must.

Some of the top metrics to track in your community include new users, retention rates, new customers sourced from the community, customer NPS, and brand reach.

Richard Millington (Founder of FeverBee) opened his talk by telling the story of an a-ha moment he had during an internship early in his career with Seth Godin. Seth told him that in communities, “it’s not about what people do, it’s about what they feel.”

This spurred Richard to become fascinated with the psychology of communities, and delve deep into research on the subject.

Here are some of Richard’s top takeaways:

These two old high school pals from G2 Crowd and Wrike spoke on innovative ways to use the voice of your customer in your next marketing campaign.

Here are their three best tips:

These two chefs cooked up a storm with their live demonstration. The dish? Successful Customer Advisory Boards (CAB).

Ingredients for a rich and satisfying CAB include:

Sounds tasty to us. Bon appetit!

Kevyn Klein (Head of Community & Growth, US Office, VIPKID) spoke about the power of her VIPKID community, and how she’s put them to work on solving some of the company’s “mission critical” problems.

Her company was struggling with low conversion rates of new teachers due to a difficult interview process. She knew that some of the teachers who weren’t completing the process were a good fit, so she used her advocates to brainstorm solutions to streamline the process. Her advocates came up with the idea to host in person events and coach aspiring teachers hoping to work with VIPKID.

The result was an astounding 900% increase in conversion rates. Advocates fundamentally changed how the company recruits and onboards new teachers.

How do you unleash the full creative potential of your community? “Get out of the way,” says Kevyn. Give your advocates time, space, resources, and autonomy to solve problems. Ask yourself: Where are you exerting too much control over your advocates, and where can you let go of the reigns more? Letting them organize user groups is one great way to make them feel empowered.

Allison Pickens (Chief Customer Officer) and Will Robins (Head of Customer Marketing) at Gainsight took the main stage later in the afternoon to share how they bring together their sales and CS teams to create a customer-led selling process, instead of a traditional sales-led process.

We all know the “first sales conversation” for a sales rep is not usually a prospect’s first interaction with your brand. In our connected era of the social web, prospects already know your flaws and features, and they’ve probably already spoken to customers—including churned ones.

However, Allison and Will found that reps who were using customer references early in the sales process had far more success than others reps who wanted to pitch the product themselves.

But how does Gainsight source enough of these genuine customer advocates for their sales team so quickly? They aligned their customer success and sales teams to do this by making part of their Customer Success Manager’s compensation based on the amount of customer advocacy they drive.

Originally, this final sessions was supposed to be a Tug-of-War debate… but panelists April Dunford (Founder of Rocket Launch Marketing), Misia Tramp (VP of Customer Experience Strategy and Insight at Metia) and Peter Garza (VP of Marketing at InTouch Health) ended up agreeing so much that they decided to switch from a debate to a panel discussion about how to create an “advocate-first” culture at your company.

Misia stressed the importance of getting your team to use the same terms to define what advocacy means to every department so that they’re all on the same page. Peter stressed that it takes time to get everyone on your side, but patience (and showing the right metrics) will help.

To celebrate a successful second day of learning and networking, campers headed to the Advocamp After Dark Party at One Market Restaurant to let loose after a busy day.

This year, the winners of the 4th annual Best Advocate Marketing (BAMMIE) Awards were set to be announced during the party… but you’ll have to stay tuned for tomorrow’s recap to find out who they are 😉

Want to see what we were up to on Day 1 and Day 3? Check these out:

Influitive CEO's New Book: The Messenger is the Message
The Messenger is The Message is your complete blueprint for building a powerful, always-on community of authentic advocates, the most effective system for efficient growth in today's social web era. Get your copy of this new book co-authored by Mark Organ and Deena Zenyk.
Get your copy!
Subscribe to Influitive's advocate marketing blogEnter your email address now to receive the latest advocate marketing resources delivered right to your inbox every month! You can withdraw your consent at any time.
​